Mark is currently the Director of Culinary Nutrition for Cabarrus Health Alliance.  Previously, he was the Director of Culinary Nutrition for the Dole Food Company and now works as a consultant. He is also a former dean of culinary arts at Johnson & Wales University. Mark is a native of England, who has worked around the world in culinary arts for 37 years. He is a frequent lecturer and judge in various international venues. 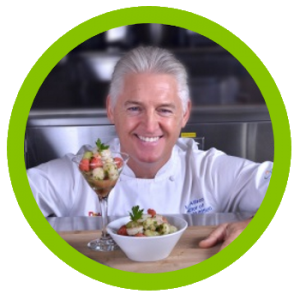 See more recipes from Our HueChef

Mark achieved fame for Neath Port Talbot College by winning Restaurant Magazines best College Restaurant in “Wales and the South West of England in 2004″. In 2003, he received the Teacher of the Year Award at Neath Port College, Wales, UK. He was personally honored by then Prime Minister Tony Blair for his dedication to the Education and Hospitality field in Wales in 2003. That same year, he won the Craft Guild of Chefs Education & Training Award, which is considered nationally the ultimate achievement in culinary arts education in the United Kingdom.

Mark is also a frequent writer for numerous culinary publications and used to have his own recipe column in the South Wales Evening Post. He has appeared live on TV and Radio in the UK and US, most recently the Cooking Channels’ “Cooking School Confidential”, and PBS’s “Overdraft” which featured President Bill Clinton and “Ice-cream Nation”. He appears regularly on WCNC The Charlotte Today Show demonstrating easy to make at home healthy cooking recipes.

Mark lives in Charlotte, NC with his three children, Jonathan, Matthew and James.