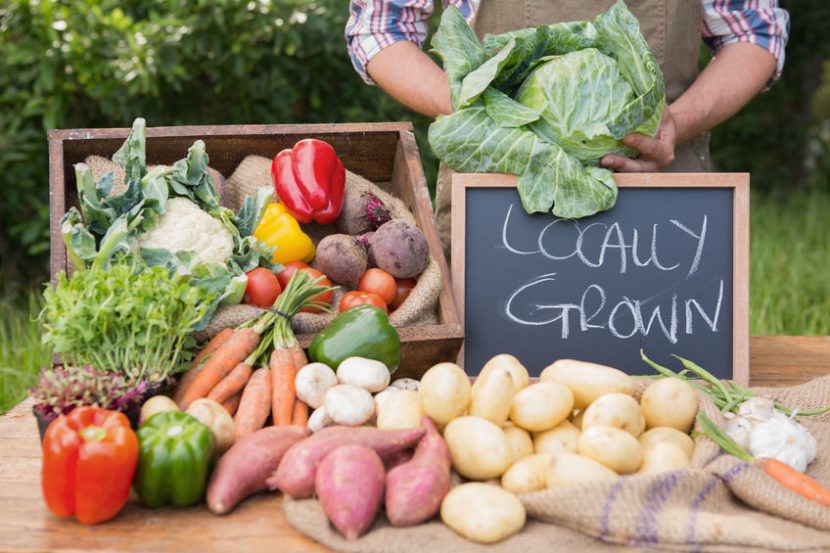 It’s National Farmers’ Market Week! To celebrate, we want to highlight this cultural phenomenon and the role it can play in your life.

If you don’t know what a farmers’ market is, the USDA defines it as: “a multi-stall market at which farmer-producers sell agricultural products directly to the general public at a central or fixed location, particularly fresh fruits and vegetables (but also meat products, dairy products, and/or grains).” The idea of such a market is to cut out the middleman – grocery stores. This can have many benefits for you as a consumer.

Of course, if you’ve been to a farmers’ market, you’ll know they sell a larger variety – such as baked food, goods, clothing, craft items, plants, and so much more. Many even feature musicians and “food courts”. So while farmer’s markets, by definition, include produce and goods direct from the farmer, in essence, they have become a community event.

A Brief History of Farmers’ Markets

The origin of farmers’ markets can be traced back to Egypt, over 5,000 years ago. Farmers along the Nile came together to sell their fresh produce. The first known farmers’ market in the USA appeared in Boston in 1634. It would make sense that these markets would have a presence so far back in history before the transportation of goods became accessible when communities were tightly-knit with the farmlands that surrounded them.

As cities began to sprawl across the countryside, pushing the farmlands further and further away from the communities they served, transportation and refrigeration opened up opportunities for these farms to lengthen their reach. In the 1700s, grocery stores became the popular source for produce and goods. Farmers markets began to disappear and interests shifted to these stores, abound with choice and convenience. When the USDA undertook its first census of farmers’ markets in 1948, there were just six in all of California.

It wasn’t until the 1970s, when America became health-conscious, that farmers’ markets began to make an appearance again. Fresh, healthy, and easy-to-prepare foods became the priority for housewives and their families. Thus, the public began to remember the quaintness of farmers’ markets, and all the access to fresh, healthy foods they provided.

Between 1994 and 2008, farmers’ markets really began to hit their stride. The number of markets increased 300% in that time, and continue to grow to this day. Today, there are more than 2,600 farmers’ markets across the country, at which Americans spend $1.1 billion annually.

Why they are so popular

If you are not a regular participant in your local farmers’ market, you may be wondering why the surge in popularity. You may be asking are they really so much better than grocery stores?

The short answer is no. Grocery stores will always be a source for many of our daily needs. Yes, anything you get from a farmers’ market, you can get from a grocery store. But farmers’ markets can make a great supplement, with quite a few benefits that may send you looking for your nearest market.

Fruits and vegetables are most nutritious when they are ripe. Studies have proved that many nutrients are formed as the food ripens. But the moment they are picked, their sugars begin to convert to starch, their plant cells begin to shrink and their nutrients begin to diminish.

When you buy produce at a grocery store, you may be buying items that had been harvested across the country, or even internationally. That requires weeks of transportation, during which the produce continues to lose nutrition. What’s more, in order to arrive at your local store ready to eat, the produce must be harvested weeks in advance, so many of the nutrients never even form. As if that’s not enough, these foods are often treated with gasses that delay their ripening – and, in turn, their ability to form nutrients – in order to ensure they survive their long journey. To make matters worse, they may be exposed to ethylene gas, in order to artificially “ripened”.

However, when you buy from a local farmers’ market, you are often getting the produce direct from local farmers. Which means that the produce has only traveled a few miles and subsequently can be picked during the ripening stage and thus are more nutitionally-packed. What’s more, farmers sell seasonally. Studies have shown that off-season produce may see a reduction in their nutrients. Finally, Local farmers also tend to use fewer chemicals than large, industrialized farms.

Conventional agriculture uses many more resources than sustainable agriculture and pollutes water, land, and air with toxic agricultural by-products.  The average piece of produce in the U.S. travels 1,500 miles, while local food may only travel 100 miles (or less), according to researcher Rich Pirog at the Leopold Center for Sustainable Agriculture at Iowa State University.  All this shipping uses large amounts of natural resources (especially fossil fuels), contributes to pollution, and creates trash with extra packaging.  This means that since local foods travel smaller distances, they actually reduce CO2 emissions.

They can also reduce emissions by preserving green space and strengthening the CO2 scrubbing power of plants.  The popularity of farmers’ markets leads to greater success for farmers, which means they are less likely to sell their land to developers.  In fact, with growing consumer demand, young farmers are increasingly likely to enter the marketplace by developing unused lots into thriving urban gardens.

Since you are cutting out the middleman, you are also cutting out operating costs and profit margins that grocery stores add to the price, not to mention the price increase for organic and locally grown food.

Also, since farmers’ markets only sell 1-2 times a week, they have significantly lower retail costs than super markets.

Lastly, farmers’ markets sell seasonally, which means an abundance of produce that drives down the price.

Hopefully, you can begin to understand how farmers’ markets came to be and why they are so popular. There are many other benefits, such as supporting family farms and the chance to communicate directly with the farmer, who just may provide you with tips, tricks, recipes, and more. It’s also a great way to get out from under those fluorescent lights and out in nature, connecting with people in your community. To find a local farmers’ market near you, you can use this online tool from LocalHarvest or this online directory of farmers markets from the USDA