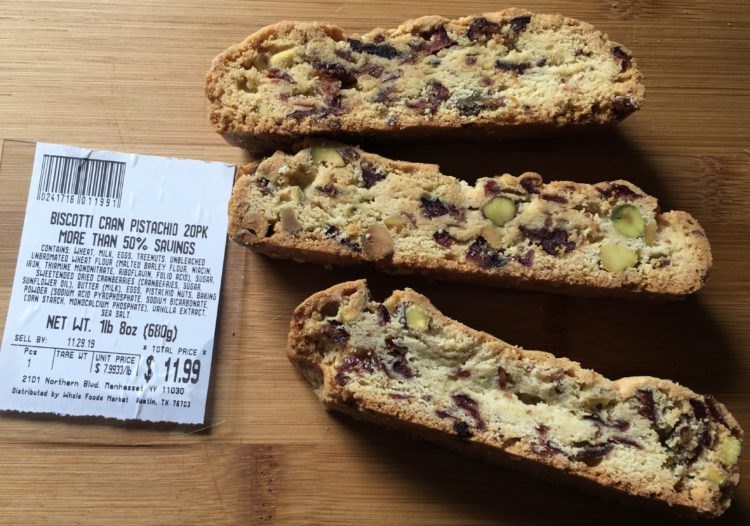 Who doesn’t like a good biscotti? It’s sweet and nutty and soft when made with enough butter, but firm enough to dunk in coffee. Pictured above are my favorite off the shelf biscotti. Biscotti aren’t healthy, but that’s not why I like them. This traditional Italian delicacy is concentrated sugars and refined carbohydrates softened with butter. Totally unhealthy and completely delicious.

Trying to make them at home is complex. Most recipes use a standard set of ingredients consisting of sugar, flour, nuts, and baking powder. Some recipes call for eggs, others call for butter, still others call for oil. Some even call for dried fruit like the cranberries in my favorite biscotti. No matter which combination of ingredients, however, there is one feature that all biscotti have in common. They are twice baked. And twice baked is too complex for my simplistic mind, so I have become a connoisseur of off the shelf.

Like all packaged cookies my biscotti are ultra-processed. Maybe if I baked them at home with carefully sourced ingredients I could get away with dropping the ultra … but just maybe.

How do I know? Because NOVA says so.

NOVA is new way to classify food. It’s a system that examines the extent and purpose of food processing. Originally developed in Brazil, the concept is gaining traction in other South American countries, Canada and France. NOVA characterizes ultra-processed foods as industrial formulations made with many unfamiliar ingredients not commonly used in kitchens. These foods are manufactured and designed to be profitable, convenient, and hyper-palatable.

My favorite biscotti fit the description. They are palatable and very tasty. The ingredient list looks mostly familiar with the exception on malted barley flour. But when I check ingredient lists for other brands, I do find suspicious additives like soy lecithin, palm kernel oil, mono- and di-glycerides, natural flavors to name a few.

The product is an industrial formulation. Otherwise, my biscotti would not taste exactly the same every time. The product is convenient too saving me the time and trouble of twice baking every single batch I mix up.

NOVA is not well known here in the states but that may be changing. We Americans are big consumers of ultra-processed products, well over 50% by most counts. Our voracious consumption is causing concern among some of my fellow dietitians. Many nutrition commentators agree that a food pattern based on minimally processed real food is the best option but I’ve yet to find anyone willing to commit to a percentage.

As for me, I know that my gut is happier when I eat less highly processed foods. But that’s a personal testimonial and anecdotal evidence doesn’t count for much. So …

IN MY HUMBLE OPINION

Proponents of an evidenced based approach to eating don’t give much credit to common sense. Those folks are scientists and view common sense much the same way as Albert Einstein “… the collection of prejudices acquired by age eighteen.” Science moves methodically and slowly and nutrition science is wicked hard. Like a never ending story, the facts of today are subject to change based on new findings tomorrow.

But since we need to make eating decisions every day with or without evidence, sometimes that collection of “prejudices” is all we’ve got. We put something the plate every day. We can’t just stop eating while science is still working things out.

So let’s be patient and let science do its thing. Let’s enjoy our biscotti without fear or worry. We have no common food culture to reference, but we do have our gut and our own common sense. One biscotti will hopefully not be a problem. Eating the whole package should give you a stomach ache.